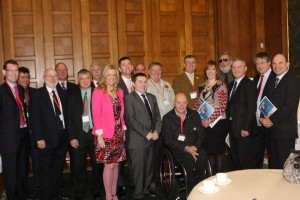 East Antrim UUP MLA Roy Beggs Jnr has again called on the Minister for Culture Arts and Leisure- whose portfolio includes fisheries- to take decisive action to conserve native wild Salmon. In particular he has called on the Minister to impose a moratorium on issuing licences for bag nets operating near the months of salmon rivers, like the Glendunn River.

Speaking during a Stormont debate on an Ulster Unionist motion on Fish stocks Roy Beggs MLA said:
“The Glens Angling Club in my constituency of East Antrim recognised the importance of conservation and introduced a catch-and-release scheme a number of years ago. It has also improved spawning grounds and ensured that there is an accurate fish count with the use of a counter. .. it is unsurprising that the only sizeable run of fish occurred during rough weather, when it was not possible for the nets to operate. The tourism and economic potential of fishing tourism greatly exceeds the benefits for the few who currently fish with nets and endanger the species…the licensed nets and the licensed bag nets scoop up virtually all the fish in some of our bays adversely affect rivers in my constituency, such as the Dun and the Glenarm.”

Official monitoring has discovered that whilst previously 30% of salmon that left our rivers returned, now less than 5% do so. The campaign to stop bag nets intercepting the salmon returning to their spawning beds has been gathering pace in recent months. The Department of Culture, Arts and Leisure (DCAL) has called for a ‘voluntary’ catch and release regime for salmon fishing on rivers. DCAL has also called on offshore net owners to forego applying for 2012 licences, to give time to consider options for the future of salmon fishing.

Speaking after the debate Mr Beggs said:
“I am still disappointed that the Minister- faced with all the evidence which she says she accepts – has yet to announce a moratorium on issuing licences to operate these nets. She has admitted that licensed drift net and bag net fishing for salmon off the County Antrim coast are intercepting mixed stocks of salmon from rivers monitored by her Department. Yet two licences were issued for bag nets in coastal waters in 2011.
The impression is given that the Department has been dragged reluctantly into facing up to the problem. This suggests that there are powerful vested interested working to prevent change happening. Despite the complacency of some- including the local SF MLA, the fact is that both the bag and drift nets operating along the north east coast have been proved to be ‘mixed stock fisheries’ and are taking fish from rivers not attaining adequate abundance. Therefore their continued use is in breach of the EU Habitats Directive and opens up the Northern Ireland Executive to the threat of European fines. Action is long overdue.”
ENDS

This entry was posted in Press Releases and tagged Salmon DCAL Glendunn. Bookmark the permalink.