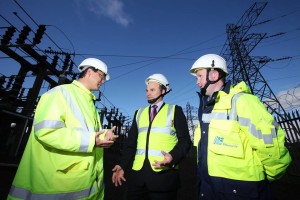 Roy Beggs MLA, who is sponsoring a NI Scrap Metal Dealers, Private Members Bill, has urged the public to report any suspicious activity to the police following yet another instance of electricity poles being cut down and the theft of copper cable.

Roy Beggs MLA said, “The criminals involved in stealing overhead cable are putting themselves and the public at risk.   In the recent case of cable theft at Ringsend Road, on the busy B66 route connecting Limavady and Ballymoney electric poles were cut down.  Electric cable would have been left crossing the pubic road exposing the public to considerable risk. These acts can often also cause loss of power and disruption to local homes and businesses.   I would urge the public to report any suspicious activity that they may have seen around the 21st July in the Ringsend Road area to the Police.” 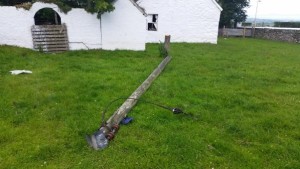 Paul Irving, NIE Security Manager, said, “Anyone interfering with electricity equipment is putting their lives at risk. They are also showing a complete disregard for the local community by leaving equipment in a dangerous state.”

“We are working closely with the PSNI to stamp out this type of practice and would encourage anyone who has information to come forward. We are keen to see tighter legislation in place to ensure that stolen metal is hard to sell – literally too hot to handle.”

The East Antrim MLA has been progressing a Scrap Metal Dealers, Private Members Bill at Stormont following a number of metal thefts in the Carrickfergus and Larne area in particular.

The new legislation in England and Wales which increases the traceability of those selling scrap metal has been credited with reducing metal thefts by almost one third.  Scotland too has approved equivalent legislation in June.   However in NI, neither the Department of Justice nor the Department of the Environment have prioritised such new controls, so Roy Beggs MLA has progressed a private Members Bill.  He completed the necessary consultations where general support for increased traceability of scrap metal transactions was evident.

This entry was posted in Articles, In The News, Press Releases, This Week at Stormont. Bookmark the permalink.