Beggs keeps Islandmagee Gas Storage on the agenda at Stormont 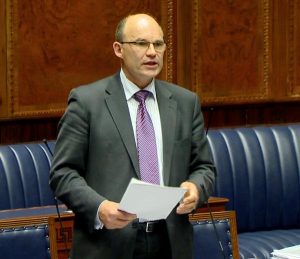 Speaking at Stormont on Monday, East Antrim Ulster Unionist MLA Roy Beggs asked the Minister of Agriculture, Environment and Rural Affairs “whether he will review the draft notice to approve marine licence ML 28_12 for the Islandmagee gas storage project and consent conditions of discharge TC041/20”. (AQO 2680/17-22)

DAERA Minister Edwin Poots MLA of the DUP replied: “I am satisfied that all material considerations have been assessed by officials for the marine licence application, reviews of the discharge consent and abstraction licence for the proposed Islandmagee gas storage development. Therefore, I do not intend to review the decisions on the matter. Final licences were issued to the applicant on 5 November 2021. I am content that adequate mitigation has been identified to minimise the impacts of the project and has been incorporated into the conditions of the marine licence, discharge consent and abstraction licence, which will augment the existing mitigation in the planning permission.

“The discharge licence speaks of 24,000 cubic metres per day, which is difficult to visualise. It has been estimated that that is equivalent to 10 20-ton loads of rock salt being deposited at that spot every hour for the next eight to nine years. How can the Minister be sure that that will not be detrimental to the sensitive ecosystem and, in particular, that solid deposits will not come with the concentrated brine that will gather in that area?”

The Minister responded, stating “At no time did I take anything to do with or interfere with any of the actual assessments that took place. I waited patiently, allowed civil servants and people with expertise, on their behalf, to carry out all those investigations, and I made a decision that was based on what was recommended to me by those officials. A number of in-depth assessments were made on the potential impacts of the project on the environment, including a detailed habitats regulations assessment (HRA), completed by DAERA, which considers the potential impacts of the project on the national site network and also the Portmuck area of special scientific interest (ASSI), Gobbins ASSI and Larne lough ASSI. The HRA was also reviewed by an independent third party. An environmental statement was prepared by the applicant. The chapters on avian and marine biodiversity, underwater noise and cumulative effects were updated in 2018-19, as was the brine dispersion model and accompanying third-party audit. That material has been made available to the public on the DAERA website.”

Following on from the Assembly Question time, Mr Beggs has urged those that can to support the No Gas Caverns justgiving page https://www.justgiving.com/crowdfunding/nogascaverns?utm_id=2&utm_term=zk428DXqm which plans to raise £10,000 to legally battle a high risk plan to mine huge caverns under Larne Lough to store fossil fuel gas.