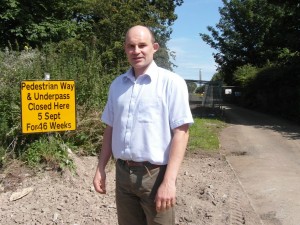 Roy Beggs MLA has sought an explanation from the Rivers Agency for the delays in the flood alleviation scheme on the Sullatober Water which has resulted in local rights of way being closed for almost a year rather than the 16 weeks that were originally indicated.

Roy Beggs said, “As a local representative I have been aware of the need to upgrade waterways and improve flood management to reduce the risk of flooding in Carrickfergus Town Centre and other locations within the Town. I was therefore very pleased when the Rivers Agency upgraded the Sullatober Water in their phase 1 development and have been supportive of their further improvements on their phase 2 which commenced from the 5th September 2011 and was expected to last some 16 weeks. It is rather surprising that almost a year later the pathways and the Shaftsbury underpass remains closed. I have contacted the Rivers Agency seeking an explanation as to why their project is taking so long? when the flood protection will be in place and finally when the public can expect these local pathways to reopen”.