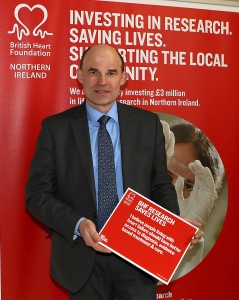 The BHF funded and evaluated the two year project with 10 NHS organisations across the UK to determine whether funding a home or community based intravenous diurectic service is safe, clinically effective, cost effective and well received by patients and carers. It was also anticipated that the intervention had the potential to help prevent the often reported “revolving hospital door” of avoidable hospital admissions in people living with heat failure.

Mr Beggs MLA commented “There seems to have been a positive community impact on the IV duirectics intervention service, with 79% avoiding hospital admission, 1,040 patient bed days being saved over the two year project duration, £3,013 being the average saving per community based intervention and 63% achieved target reduction in oedema and weight loss.  I have also been advised that 100% of patients and 93% of carers preferred community based treatment, as opposed to hospital.”

Heart Failure is a common chronic condition affecting about 550,000 people in the UK with increasing prevelance due to the combined effects of improved survival after heart attacks and an ageing population. Annually Heart Failure accounts for around 2% of the total NHS budget (approximately 70% of this cost is due to the cost of hospitalisation), more than 1 million inpatient bed-days per year and accounts for 5% of all emergency medical admissions.

This entry was posted in Articles, Assembly, Health Committee, In The News, Press Releases. Bookmark the permalink.