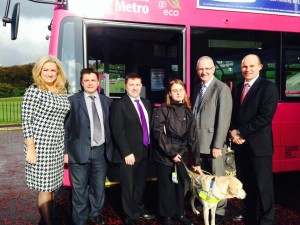 East Antrim representative Roy Beggs MLA said “I welcome the continued commitment of my Party colleague, Minister Danny Kennedy MLA, to improve the infrastructure by implementing audio visual information systems on the Belfast Metro bus network which extends as far as Monkstown in my own constituency. I would hope that the Metro bus network could be expanded to include Carrickfergus and Larne and that the whole of East Antrim could then have access to the audio visual systems in the future.”

This entry was posted in Articles, Assembly, Health Committee, Press Releases, This Week at Stormont. Bookmark the permalink.