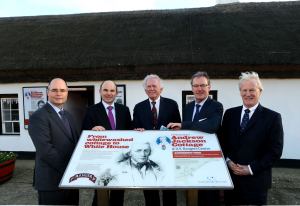 United States Special Envoy for Northern Ireland, Gary Hart, has visited the Andrew Jackson cottage alongside local Ulster Unionist MLA Roy Beggs Jr.  The Veteran US politician previously served as a Senator for Colorado from 1975 – 1987, and twice ran for the Democratic nomination for US President (1984 & 1988).

Roy Beggs MLA said, “Former Senator Gary Hart is a senior influential figure within the Democratic Party.  I was pleased that he took up Mike Nesbitt’s suggestion to visit the Andrew Jackson Cottage, at Boneybefore, Carrickfergus.   I was very struck by his interest in the Jackson family origins.  Andrew Jackson is held as an iconic figure by many Americans involved in the Democratic Party”.

President Andrew Jackson was born a few years after his parents left Carrickfergus. He worked as a labourer on the railway, but then studied law and practised at the Bar.  He went on to become a founding father of the Democratic Party and become the 7th President of the USA.

The Ulster Unionist MLA concluded by saying “With so many American presidents and citizens with Scots/Irish and Ulster origins it is important that we maintain cultural linkages and grasp tourism and any potential business opportunities from our American cousins who hold many similar values to ourselves.”