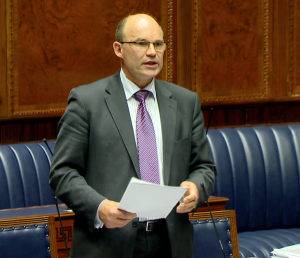 Ulster Unionist MLA Roy Beggs has welcomed confirmation provided by Regional Development Minister Danny Kennedy MLA that NI Water will include a no fracking clause at the Infrastrata Woodburn exploratory borehole site, both now and in the future.

“I met with NI Water and expressed my concern at potential risks to the Woodburn reservoirs and the public water supply from oil exploration and the potential for future fracking. This is particularly relevant given that test drilling is taking place within a water catchment area. I subsequently wrote to Minister Kennedy last month outlining my concerns at the potential for future fracking at this site, which may emerge from any test drill.  I suggested that in any lease, an explicit ban on fracking should be included.”

I am pleased to receive written confirmation from the Regional Development Minister Danny Kennedy MLA that “NI Water is aware of the public concern regarding the proposed oil exploration work at Woodburn Forest and I can confirm that the company has agreed to include a clause in the agreement with Infrastrata to prohibit the use of the technique known as hydraulic fracturing (“fracking”), both now and in the future.”

NIEA had been requiring a high level of protection for the environment against any potential oil spill.  However, Roy Beggs MLA had urged that further precautions should be taken to reduce the potential of contamination of the water supply in the Carrickfergus area.

Minister Kennedy said “NI Water has advised me that it has liaised with Infrastrata with regard to onsite operational activity.  In the event of an emergency, protocols and procedures would be followed and appropriate measures taken to protect the public water supply, including operating the sluice to prevent water moving from the affected area.”

Roy Beggs MLA added “I welcome these additional measures to assist in protecting the public water supply in the Carrickfergus area, both now and in the future.”