Good News at Last for Lindara Residents after Minister’s Visit 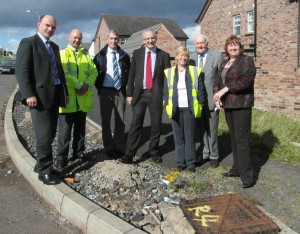 Ulster Unionist Minister for Regional Development Danny Kennedy was in Larne on Wednesday afternoon with officials from the Roads Sservice and NI Water to see for himself the unfinished Lindara development. Lindara has the largest value of outstanding roads bonds (£795,260) activated by the Department for Regional Development, in the whole of Northern Ireland. The Minister was shown around the development by a delegation of Ulster Unionist Party representatives led by Roy Beggs MLA and accompanied by Cllr Maureen Morrow and Ald Roy Beggs Snr.

Roy Beggs MLA commented:
“The issue of the unfinished groundwork at Lindara has been a pressing issue for local residents even well before the developer Eassda Holdings went into administration in 2009. Last summer (July 2011) the DRD Roads Service initiated Article 11 of the Street Order to start the process of completing the outstanding work on the roads, footpaths and sewers using the 10 roads bonds which were in place.

On behalf of many residents who have contacted my Larne office, I have been pushing for a timetable for the work to be completed. When the development is properly finished it can then be ‘adopted’ for future maintenance by the relevant public authorities, specifically Northern Ireland Water for the drains and sewers and DRD Roads Service for the streets and pavements.

This has been a long and at times frustrating process with a lack of visible progress apparent for the residents. That is why I felt it was important to bring the saga to the personal attention of the Minister to try to move the process forward.”

Speaking later, Roy Beggs MLA said: “This was a very worthwhile site meeting, and I was delighted at how well briefed Minister Kennedy was on the issues. We were advised that there has been considerable recent activity with NI Water spending around £100,000 to repair the sewerage infrastructure after having surveyed around 4 kilometres worth of underground piping. An unexpected and unexplained delaying factor was the presence of large quantities of concrete which had been poured down several manholes.

The good news however, is that the vast majority of the work to the sewers has been completed by NIW, with only a couple of manholes still to be repaired.

We have learned that Roads Service will be in a position to issue a works order as soon as NIW are off site, and that should be within a month at most. We pushed very hard for a commitment to a firm timetable and the official finally conceded that all outstanding infrastructure works- sewers, footpaths and street surfacing should be completed by early in the New Year.

This should be of some comfort to the many long suffering residents who have put up with substandard streets and pavements for years. It also opens up the opportunity for the link road between Lindara and Walnut Hollow to finally be connected. This will ease traffic congestion on the Killyglen and top of the Linn Roads, and also opens up the possibility of bus services being extended into these substantial housing developments.” ENDS