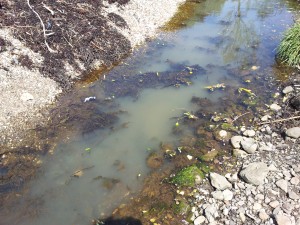 Pollution visible in stream at Millbay

Ulster Unionist MLA for East Antrim Roy Beggs Jnr has said progress has been made in finding a solution to the problems with the newly installed mains sewerage system at Millbay, Islandmagee. The local representative was speaking after a presentation was made to local residents and Environmental Health Officers by consultants URS who have just concluded a 9 month investigation on behalf of Northern Ireland Water.

Mr Beggs said:
“Problems with flooding and pollution from domestic sewage predate the installation of first time mains sewerage at Millbay over 5 years ago. However it has been a source of immense frustration to local people that there has been a catalogue of issues with the new system and the Sewage Pumping Station which pumps the Millbay sewage up to Mulloughbuoy for secondary treatment and coastal discharge. It was really only last summer after concerted lobbying and a meeting organised by my office and the Islandmagee Community Association that NIW realised and admitted that this was more than a wet weather issue and instigated a proper investigation at Millbay. It was soon discovered that a telemetry system installed at the new SPS on the Ballytober Road was not fit for purpose and the repeated overflows into the stream and lough were not being monitored properly. Subsequent Investigations have revealed that 4 properties in the hamlet were connected to an old, previously unidentified crockery sewer pipe which in turn was discharging raw sewage into a watercourse causing obvious pollution. 3 of the 4 are now connected to the new public sewers. NIW have also told us that they will be instigating a package of works to overhaul the equipment at the SPS and address where groundwater is getting into the foul sewer.”

The Ulster Unionist MLA praised the work of the local Community Association in Islandmagee in highlighting the issue and pushing for a solution. He added:
“ I would praise the tenacity of the Islandmagee Community Association in pursuing this matter. In particular the expertise of several affected Millbay residents has been invaluable. I hope that lessons have been learned by NIW who had just been formed out of DRD Water Service when the Millbay sewers were first installed. Communication breakdowns were sadly the order of the day when pollution incidents first became apparent. Hopefully this has now been rectified with a new NIW incident call centre now fully established and operational. I trust Millbay residents will not need to report problems in the future, when the remedial work is complete. Larne Lough should be given the protection from pollution it deserves as a sensitive shellfish habitat. “