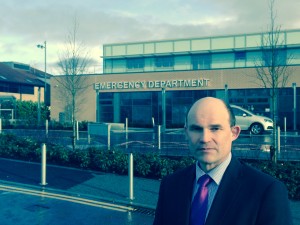 East Antrim Ulster Unionist Party MLA Roy Beggs Jr, has hit out at ‘unnacceptable’ waiting times in the Northern Health and Social Care Trust area, for first consultatnt-led outpatient appointments.  The figures were revealed as a result of an Ulster Unionist Party question to the Health Minister at Stormont.

“Figures provided by the Health Minister show that as of the 10th September 2015, there were nearly 4 thousand people waiting over 18 weeks for their first consultantn-led outpatient appointment at Antrim.  This figure has jumped around 900% in two years from 372.  Whiteabbey has also increased from 151 in 2013 to 2159 in 2015.  This sharp increase is unacceptable and adds to delays in necessary treatment.  As a result, patients and their families suffer and this also emergency visits to our already overstretched A&E’s.

Mr Beggs, a former member of the Health Committee, added “We in East Antrim are all heavily reliant on Belfast hospitals for specialist treatments.  The figures for the combined Belfast hospitals also makes grim reading.  In two years from September 2013, the number of outpatients waiting for their first consultant-led appointment has increased from 5156 to a staggering 48190.  Something has to be done, as the people of Northern Ireland deserve better;  The waiting lists for ICAS and hospital treatments are also unacceptable.  It is time for the Health Minister and the Northern Ireland Executive to step up to the mark and better provide the better healthcare that is required.”

This entry was posted in Articles, Assembly, Health Committee, In The News, Press Releases, This Week at Stormont. Bookmark the permalink.