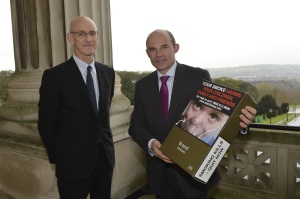 Roy Beggs MLA from East Antrim, is standing up for standardised packaging. The Assembly voted for the Legislative Consent Motion (LCM) earlier this year and we expect the Northern Ireland Executive to fully support the LCM when it is finally approved by the Secretary of State for Health in London in 2015.

This follows an extraordinary meeting where two All Party Groups – Heart Disease and Stroke, and Cancer came together for the first time ever to highlight the growing concern around the impact of tobacco packaging and marketing on younger members of society as well as the importance of smoking prevention.  Both All Party Groups have the support of five major charities– Stroke Association, British Heart Foundation, NI Chest Heart & Stroke, Cancer Focus NI and Cancer Research UK.

Roy Beggs MLA said “Professor Britten outlined how standard packs being introduced in Australia has resulted in a 5% drop in cigarettes sold per head of population.  The consumption of tobacco and cigarettes in the first quarter of 2014 was the lowest ever recorded and that smoking prevalence has fallen by 15% since 2010.  This outlines that standard packs work in reducing smoking consumption, which must be welcomed.  Standardised packages save lives.”

Smoking is the single greatest cause of preventable illness and premature death in Northern Ireland, killing around 2,300 people every year. All five charities highlighted research findings which show two thirds of smokers started before they were 18 years old and marks the beginning of an addiction that kills half of all long-term smokers.