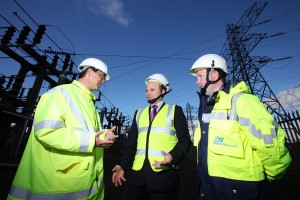 Roy Beggs MLA, Ulster Unionist MLA for East Antrim has gained wide support in the NI Assembly to progress his Scrap Metal Dealers, Private Members Bill through to the Assembly’s Committee scrutiny stage.   The bill follows the principles of the GB legislation which creates an audit trail of those selling scrap metal to dealers and was credited with reducing metal theft by one third in England and Wales.

Mr Beggs MLA, while addressing the Assembly, talked about the local impact of metal theft and the need for such legislation;

“I live near Gleno in a rural community between Larne and Carrickfergus, and there have been a number of incidents in my local community that have shown me from experience that this has been a major problem. First, in Gleno, a new set of street lights was installed by Roads Service to link the village to the local bus stop at McDowell’s shop. Within two weeks, the lights stopped working, and, when I enquired what the nature of the fault was, I was advised that thieves had stolen the underground cable. This was at a cost to the public purse, with inconvenience and loss of service to the public. My church, Raloo Presbyterian Church, was targeted, and the lead was stripped off the hall roof. Through this, I learned that it is not just the discomfort of having your property attacked and the value of lead stolen but that there is the cost of weather damage to the interior of the building as a result of water ingress. Then, again, there is the cost of repair for installing new non-lead material. So, clearly, there is a need to address this issue. Considerable costs are being incurred in the community as a result of metal theft. Similarly, several schools in my constituency have been targeted — Greenisland Primary School, Downshire School and Ulidia Integrated College — disrupting children’s education. Equally, many private homes, social houses and businesses have suffered considerable loss and inconvenience, primarily around the issue of lead-flashing and copper-piping theft. A few miles up the road from where I live in the Gleno valley, there lies the Ballyvallagh NIE electricity substation, which supplies electricity to much of Larne. I discovered that, on two occasions, the copper earth cables had been stolen. Those who carried out those thefts will have done so at considerable personal risk, and, in addition, the theft endangered the substation and could have resulted in significant failure and the subsequent loss of power for a considerable time to a wider group of constituents in the Larne area.”

Talking about the detail of his PMB, Roy Beggs said;

“In addition to reduced bureaucracy for dealers, small dealers in particular, I propose that for Dealer sales to customers, that for sales of less than 50 kilograms, details would not have to be recorded. What does it matter to whom a second-hand door handle, car door or bonnet is sold? The English system would require the small dealer to record that information and take the identification details of the person to whom he sells that item. I view that as unnecessarily bureaucratic. There is no harm in keeping a record of the bigger items. In that way, if a car is stolen, at least the engine or gear box could not be sold that way in most instances and a degree of traceability is enabled.”

“Members of the Legislative Assembly like myself are tasked with law making for the benefit of our constituents.  My Scrap Metal Dealer Bill could make it easier for the PSNI to trace those involved in stealing metal and selling it to dealers.  This increased risk of detection by itself would deter the metal theft and so lessen to likelihood of disrupt lives and businesses.

Roy Beggs MLA’s Private Members bill has now been referred to the Assembly’s Environment  Committee for the detailed scrutiny.