An Ulster Unionist Party delegation led by Euro MP Jim Nicholson and local MLA Roy Beggs Jnr has met with senior management at the Port of Larne to discuss future developments at the harbour. 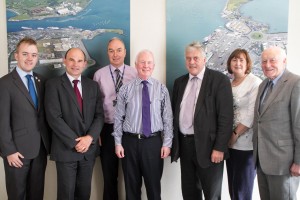 East Antrim MLA Roy Beggs said;
“We were pleased to welcome Jim Nicholson MEP back to Larne this week and I thought it was important that we took him to the harbour to talk to the senior management at the Port of Larne. There has been considerable local concern at the recent reduction of trade at Larne harbour with associated loss of valuable jobs, so we took the opportunity to ask what plans the P&O owned Port have to regain business, and offer the assistance of our MEP Jim Nicholson.”

Roy Beggs MLA commented:
“It is clear from our discussions that Larne has suffered more than other Ports on the eastern seaboard from the current economic downturn. In addition, it is of great concern to us that the recent Seatruck pull-out took some valuable and experienced local staff from Larne to Belfast who have now been put out of work by Seatruck abruptly ending their short lived Belfast-Heysham operation. Obviously this was outside of the control of the Port of Larne but nevertheless it is distressing news for all the people concerned, and their families. On a more positive note, we have been assured that the P&O owned port at Cairnryan is on the verge of a major investment and upgrade to its berthing facilities, subject only to the relevant statuary approval. This multi million pound investment will demonstrate a long term commitment to the Larne-Cairnryan route across the North Channel and give some re-assurance to those dependent on the Port of Larne for employment.”

Speaking after the meeting, Jim Nicholson MEP said:
“It is obvious that shipping activity at the Port has taken a downturn in the couple of years since I last visited Larne harbour. Nevertheless there are reasons to be optimistic for the future. I note that work has finally started on dualling the remaining single carriageway sections of the A8 road. When completed this will help bring Larne back to its position as the gateway to Northern Ireland. The short crossing from Larne to Scotland and the routes to and from the ports have long been recognised as important transport links at a European level, and I have always taken the opportunity to argue for investment in transport infrastructure on both sides of the North Channel. In a similar vein I am delighted that the revised Regional Development Strategy under my colleague, the Minister Danny Kennedy has recognised the strategic importance of the Port of Larne to the economic development of the entire region.”
ENDS