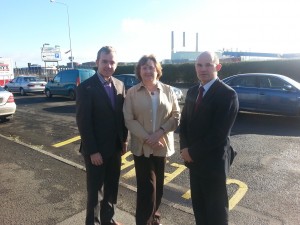 P&O have emphasised their commitment to the Port of Larne at a meeting with local Ulster Unionist Party representatives at the Harbour.  They have pointed to an investment of £15M in a new berthing facility in Cairnryan as a demonstration of their commitment to the Larne – Cairnryan route.  Both ports are part of the P& O Ferries Group of companies. Local construction firm McLaughlin & Harvey have won the contract to build the new Linkspan.

Roy Beggs MLA along with Larne Mayor Maureen Morrow and Cllr Mark McKinty met with MD Keith Millar at the Harbour office to find out what the future of the Port is.

Roy Beggs MLA said, “It is obvious to anyone that there is much less activity at Larne harbour now than it was the past.  For that reason we felt it was important to follow up previous meetings, by talking to the Port of Larne management about their future business plans.

It is a fact that freight traffic has halved in recent years, but I am relieved to some extent that the Port is actively seeking new business, not limited to the traditional roll on/ roll off freight traffic.   I pointed out that P&O needed to up their game in terms of competing for passenger traffic with Stena.  Again we had reassurances that better marketing was being rolled out with a revamped, more user friendly website being developed and more special offers.”

The UUP delegation was informed that recent negotiations on a proposal to import Coal into the harbour have been unsuccessful, but than other bulk shipping options are being actively explored.

Cllr Mark McKinty commented, “It clearly is a difficult time for all operators on the North Channel and Irish Sea route and the Port of Larne face a difficult year ahead with the continuing roads works on the A8.  Traffic disruption has been kept to a minimum so far, but we have been told that there will be one more overnight closure before Christmas to enable bridgework to be completed.   It is a pity all this work was not done 10 or 20 years ago, but when complete, the dualling of the entire A8 will be a major marketing tool for Larne Harbour.”

Larne Mayor Cllr Maureen Morrow added: “We had a very open and frank interview.  We pointed out that with the imminent restoration of the Gobbins as a tourist attraction could open up great opportunities for P&O to work in partnership with the Council to develop the day trip market, and encourage foot passengers back from Scotland.  I am heartened that the public relations/ marketing function has recently been brought back to Larne from Dover.”