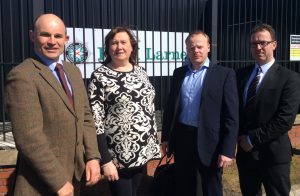 A delegation of local Ulster Unionist Party representatives have met senior PSNI officers at Larne Police Station to discuss the criminal feud which has led to 10 arson attacks in the town since Easter.

“Our meeting with the PSNI was an opportunity for some frank discussion about the recent arson attacks, assaults and crime in the Larne area.  The Ulster Unionist party backs the rule of law and not the rule of the jungle and we will remain totally supportive of the PSNI as they continue to try and combat the ongoing issues. We were given details of the additional police resources and patrolling that have been committed to the Larne area to try to combat the feuding elements.

“It is imperative that those who have endangered life are brought to justice and that no more innocent bystanders are caught up in what has become a tit-for-tat fall out.  The Police need the eyes and hears of the community to help bring this to an end. I would appeal for anyone who has information that may help the PSNI with their investigations to use the 101 PSNI contact number or alternatively the Crime Stoppers on 0800 555 111.”

“We had an open and frank discussion about all the issues surrounding the spate of arson attacks in the Larne area.  I certainly came away with the strong impression that the new Police Commander is determined to deal effectively with the culprits.

“The message which has to go out is a simple one:  the only legitimate force of law and order is the PSNI, and people deciding to take the law into their own hands and seek revenge themselves only leads to a downward spiral of destruction.  The fear is that if this continues someone will end up dead.

“We sought and received assurances that everything that can be done is being done to convict those who started this whole series of incidents.  There can be no toleration of criminality and gangsterism – which these arson attacks are a symptom of – anywhere in East Antrim.”