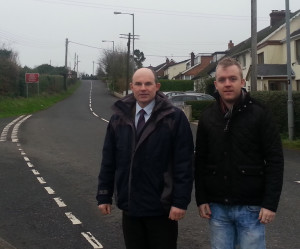 After being made aware of the recurring problem of speeding by members of the Ballycarry community, Ulster Unionists Roy Beggs MLA and Cllr Mark McKinty have contacted Transport NI to press for improved signage and traffic calming for the village.

Roy Beggs MLA said “In communication that I passed onto Transport NI, I made it clear that further traffic calming measures are needed within the 30 mph limit at each of the approaches to the village: For example rumble strips and red road speed markings to increase awareness amongst motorists that they have entered a restricted speed limit area.”

Larne Lough Councillor Mark McKinty shared concern about the issue and advised that the concern of speeding has also been raised with him from the local community that there is a wider issue about speeding in the village. “Genuine concern for safety of local residents, particularly the young and elderly, have highlighted the danger on areas such as Main Street and Island Road. PSNI have engaged in surveys and continue to monitor the situation which, along with road sign and marking improvements will help restore safety in and around Ballycarry”.

Transport NI officials responded to advise of the following proposals for the village:

Transport NI continued, stating that “with everyone’s agreement it is envisage that these measures will be implemented early next financial year. Any part of the scheme affected by the proposed resurfacing scheduled for the summer will be deferred until after its completion. Vehicles speeds will then be monitored after the scheme has been completed in its entirety to ascertain how effective the measures have been.”

Concluding, Roy Beggs said “I welcome the fact that officials have taken on board the concerns that have been made to me by local residents and I look forward to the proposals being realised for Ballycarry village.”

This entry was posted in Articles, Deputy Speaker, In The News, Press Releases. Bookmark the permalink.