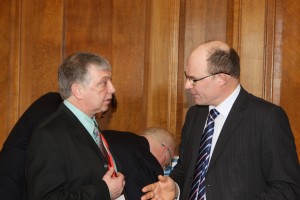 East Antrim MLA Roy Beggs Jnr has raised the issue of salmon conservation at Stormont. He has asked the Minister responsible about the practice of issuing licences for drift/bag nets in coastal waters which is widely blamed for causing the dwindling numbers of salmon able to return to their native rivers to spawn new generations of fish.

“The issue of conservation of fishing stocks – particularly salmon is one which local angling groups have been pushing with vigour in recent times, in light of dwindling numbers in our streams and rivers. I was pleased to attend a recent information event at Stormont organised by my Ulster Unionist Party colleague Robin Swann MLA. One of the major issues raised at the event by angler groups was the continued use of bag nets in coastal waters- a practice supposedly banned by the UN and European Union Directives. From questions I have placed with the Department of Culture Arts and Leisure- who are responsible for fisheries- I am surprised and concerned to learn that licences for bag nets in coastal waters continue to be issued. The Department licenced 2 bag nets for salmon fishing in coastal waters around Northern Ireland last year. These nets are non-selective and damaging to population numbers for the North Atlantic Salmon. They affect rivers right down the East Antrim shoreline including the River Dun and the Glenarm River.”

Whilst the DCAL Minister has asked for a range of voluntary measures to converse native salmon stocks, she until recently was resistant to calls to update legislation.

“The Fisheries Act in Northern Ireland dates back to 1966 and there is an urgent need to update the law- not least to avoid the risk of EU fines being imposed on the Department and ultimately the taxpayer. Action needs to be taken now to conserve this great natural resource, so that the chance to exploit the tourism potential of leisure fishing is taken in the years to come.”

In conclusion, Roy Beggs MLA said, “Wild Salmon bring great enjoyment to the many river fishermen who strive to catch them. They can play a part in attracting more tourists and visitors to the Glens of Antrim to benefit the local economy. Their value to the environment and the community is much greater than the mere commercial value to the very few who profit from the use of drift nets and the even more effective bag net. The Glens Angling club have shown their long term commitment to our wild salmon by practicing catch and realise. It is time that the nets which are endangering the sustainability wild salmon are banned.”