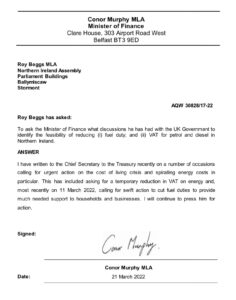 East Antrim Ulster Unionist Party Assemblyman Roy Beggs, who serves as Party Spokesperson for Transport, has written to the Finance Minister Conor Murphy MLA asking “ What discussions he has had with the UK Government to identify the feasibility of reducing fuel duty and VAY for petrol and diesel in Northern Ireland.”

The UUP MLA added “I believe there needs to be a concerted effort across the UK to address the cost of living crisis, as inflation continues to soar. A temporary reduction in fuel duties and VAT for petrol and diesel would be a starting point. I have pressed the Finance Minister on this idea and I will be a taking a keen interest on Wednesday as Chancellor Rishi Sunak presents his Spring Statement to the House of Commons. We need to be doing more to support households!

In response to East Antrim MLA Roy Beggs, the Finance Minister stated: “I have written to the Chief Secretary to the Treasury recently on a number of occasions calling for urgent action on the cost of living crisis and spiralling energy costs in particular. This has included asking for a temporary reduction in VAT on energy and, most recently on 11th March 2022, calling for swift action to cut fuel duties to provide much needed support to households and businesses. I will continue to press him for action.”

This entry was posted in Articles, Assembly, In The News, Press Releases, Public Accounts Committee, This Week at Stormont. Bookmark the permalink.