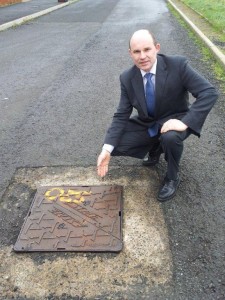 East Antrim MLA Roy Beggs Jnr has encouraged his constituents to write to him or the Regional Development Committee at Stormont with their experiences of unfinished private developments. The Committee- of which Mr Beggs is a member- has already discovered that the Lindara site in Larne is the development with the longest length of currently unfinished roads and footways in the whole of Northern Ireland- 2167 metres. They are therefore unadopted by the DRD Roads Service- the government agency responsible for roads maintenance.

The Ulster Unionist Assemblyman said:
“I have in the past lobbied the DRD Roads Service to take much earlier enforcement action to force Roads Bonds to be drawn down and developments to be completed. In the past the Roads Service has not directed sufficient resources to ensure timely adoption of new roads in new developments. At one time constituents in the Prospect area of Carrickfergus advised me that 16 years after they had moved into new homes their roads and sewers were still not adopted. It took me two years of hard lobbying to achieve adoption of the roads and sewers. Only then was the risk of sewage flooding comprehensively addressed and full responsibility for maintenance of roads and footpaths passed to the Roads Service. Clearly this process is taking too long, hence the need for the Review which the Regional Development Committtee has embarked on.”

The East Antrim MLA has already discovered through the Committee that the development with the highest value of roads bond in the whole of Northern Ireland is Lindara in Larne. A roads bond is a sum of money which a private developer has to deposit in a financial institution as a form of surety to ensure that the roads, street light and sewers are properly finished.

Roy Beggs MLA commented; “It is shocking to learn that 10 bonds to the value of £795,260 are held for Lindara in Larne. Why has it taken so long to draw down funds and carry out the necessary improvements to have the roads and sewers adopted? The good news however that is the Department are now taking what is known as Article 11 enforcement action, and will be drawing down the bond funds to pay for work to be completed. It is estimated that all outstanding work in relation to sewers, roads and footpaths will be carried out and completed over the next year. When complete these vital pieces of infrastructure will be the responsibility of the DRD Roads Service and NI Water to maintain. It will also mean that Council services like bin collection and street cleansing will not be hampered, and the possibility of the introduction of public transport routes opened up.”

Roy Beggs added that the Regional Development Committee were keen to hear of the personal experiences of affected residents as part of its enquiry, which will inform a Report with recommendations for action.

He added:
“The issue of unadopted roads and unfinished developments is one of great concern to many residents in many locations throughout East Antrim. There has been a great deal of confusion about who is responsible for bringing footpaths, streetlights and sewers quickly up to standard. Therefore I am glad that one of the Stormont Committees I sit on- Regional Development- is conducting an in depth investigation into the issue. I would encourage any local residents who have had problems with unadopted roads and unfinished developments to write in with their experiences. Either directly to the Committee at Stormont Room 435 Parliament Buildings Stormont Belfast BT4 3XX committee.regionaldevelopment@niassembly.gov.uk or to my offices in Larne; 41 Station Road BT40 3AA roybeggs.office3@btiopenworld.com or Carrickfergus 3 St Brides Street BT38 8AF roy.beggs@co.niassembly.gov.uk .”
ENDS

Background for EDITORS:
An unadopted road is one where a street planning function has been exercised, a bond has been placed under the Private Streets (NI) Order 1980 and the Department is not satisfied that the street has been sewered, levelled, paved, channelled, made good and lighted.
There are many instances across East Antrim and Northern Ireland where people have bought and occupied homes in private developments where the roads, footways, drains and sewers are left unfinished. The Private Street Order 1980 is meant to protect homeowners from such a situation by placing a duty on developers to consult with Roads Service on the design of the street and ensure it meets their standards. Developers must also take out a surety bond before they begin construction to ensure Roads Service can complete the works should they be unable to.