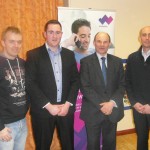 Local Ulster Unionist MLA Roy Beggs Jnr has expressed his pleasure at the interest shown by the public in an Information meeting he convened in Glenoe about Broadband Internet availability. About 45 members of the community attended in Glenoe Valley Young Farmers’ Hall on Friday night, 2nd March. This was the second such meeting organised by the Ulster Unionist Party in recent weeks, where alternative means of accessing Broadband were explained in the context of the patchy availability of Broadband fixed line services in rural areas.

Opening the well-attended community meeting, Roy Beggs MLA explained that he has pursued the issue of lack of reliable broadband availability in rural East Antrim for a number of years. The East Antrim MLA said:
“I am very well aware of fixed line broadband black spots between Glenoe, Carrickfergus and Ballynure. Whilst improved Broadband services have been promised by government, many people in this and similar rural and even semi-rural locations remain isolated. Northern Ireland was meant to be first region in Europe to have 100% access to high speed internet. That has been an empty promise for those of you who are too far from an exchange to get ADSL broadband. Speaking from personal experience, some of the customer service failures from broadband providers have been appalling.”
The Ulster Unionist MLA then up-dated the audience on recent correspondence he had received from BT on rural broadband unavailability, “ADSL broadband is a distance dependent service and as such the service is dictated by the laws of physics in that the broadband signal is pushed down the line from the telephone exchange and will either work or not depending on the distance of the line.
Whilst researching the broadband availability in these areas last week there are distance issues …there are no current plans outside BTUK to provide additional upgrades to the considerable amount of work already undertaken under the fibre to the cabinet broadband rollout programme across Northern Ireland.”

Mr Beggs introduced Scott McClelland Managing Director of Bluebox Broadband and owner of North West Electronics. NWE Wireless Networks were recently successful in their application to the Department Enterprise Trade& Investment Northern Ireland Broadband Fund. The application included an extensive expansion of their WiMAX wireless Network in rural areas, including around Larne. Mr McClelland explained his company’s “line of sight” wireless broadband which means that each household must have a broadband antenna with an unobstructed view to a NWE broadband mast.
Dominic Kearns Northern Ireland regional sales for Satellite broadband provider Onwave then outlined this company’s system. Onwave has been awarded the rural broadband services contract to provide broadband to rural homes and businesses in Northern Ireland that cannot be accessed via telephone lines. This contract is a key element of the UK’s Department of Enterprise, Trade and Investment’s continued commitment to provide 100% broadband coverage in Northern Ireland.

Ian McMaw of the College of Agriculture, Food and Rural Enterprise Information Technology team also presented and illustrated the online services that are available for farmers.
Roy Beggs MLA said, “Broadband is becoming increasingly important to local farm businesses, and has become more essential following the closure of the Larne DARD office. There are increasing opportunities to complete returns on-line. I have been told that some farmers have resorted to using wifi hotspots in supermarket carparks rather than having to drive to the nearest office in Mallusk.”

Speaking after the meeting concluded Mr Beggs said:
“I felt that it was really important to up-date the local community about the current situation and to allow them to learn more about newly available technologies and to question the alternative broadband providers. I was pleased that Bluebox Wireless broadband and Onwave satellite broadband- who both presently hold DETI contracts explained their services in detail and took questions from a lively and engaged audience. I think the importance of this issue was illustrated when one of the presenters indicated to me that he had never received such a high level of interest at any similar gathering.”

This entry was posted in Press Releases and tagged Glenoe Gleno Broadband. Bookmark the permalink.