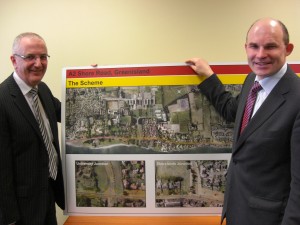 Ulster Unionist MLA Roy Beggs has welcomed the confirmation of Stormont government funding to widen the A2 at the Greenisland bottleneck, and to complete the dualling of the vital A8 Trans-European Transport Network (TEN-T) route between Larne and Belfast.

Roy Beggs MLA said, “I am delighted that funding has finally been made available by the Executive and that an Ulster Unionist Roads Minister, Danny Kennedy has prioritised the road widening scheme at Greenisland.  Only one year ago, with the 2011 budget approved by the DUP and Sinn Fein, the prospects for the A2 widening appeared bleak.   It was a scandal that after all the years of preparation the funding was removed from the budget. Thank fully, an Ulster Unionist Minister, has now given the A2 the go ahead. Commuters and businesses have suffered severe traffic delays on the A2 for too long.  I am also pleased also that the finance has been put in place to go ahead with the A8 Kilwaughter to Bruslee dualling after months of uncertainty.  We must of course wait for the Public Enquiry to report before details are finalised.”

Over the past decade, Roy Beggs MLA has actively worked for the A2 Greenisland up-grade to be recognised within the Regional Development Transport Plan and the Belfast Metropolitan Area Plan.  He supported the preferred route and has lobbied successive Regional Development Ministers to commit to the project’s completion.

The Ulster Unionist MLA said, “Over recent months, I have continued to lobby for the A2 Greenisland up-grade through my role as a member of the Regional Development Committee which monitors the Roads Service.   I have highlighted the official statistics which showed that the average speed was less that 10mph during the during the morning rush hour”.

Some property adjacent to the planned route has already been purchased under blighting legislation and has been lying vacant detracting from the neighbourhood.

Roy Beggs MLA said “I am pleased that the final approval that has now been given to the widening of the A2 at Greenisland.   I believe that is better that there now is certainty for all concerned and that property already purchased will not be left vacant for a prolonged period of decay.”

Turning to the A8 project Roy Beggs MLA said, “The section of the A8 between Kilwaughter and Bruslee is the only section of the East Coast route still not dualled between Larne and Cork. The need for improvement in this significant TEN-T route has been widely recognised.  I look forward to learning more of the outcome of the Public Enquiry, as I appreciate there have been concerns expressed at the preferred route which envisages a by-pass to the west of Ballynure village.  However overall I welcome the commitment by the Executive to up-grade the A8 road.  This will benefit commuters, tourists, and businesses who use the route to and from the busy ro-ro Port of Larne.”

In conclusion Roy Beggs MLA said, “These two major projects will benefit local quarries and create and sustain construction jobs.  In addition, the improved roads network to Larne and Carrickfergus from Belfast will make East Antrim more attractive as a location for further private sector investment and jobs.”