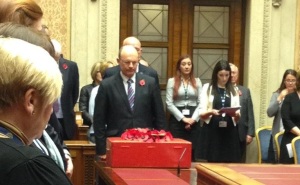 East Antrim Assemblyman Roy Beggs MLA has led the annual Service of Remembrance at the Northern Ireland Assembly, in his role as Deputy Speaker. The UUP man read a lesson, laid a wreath and led the last post ceremony, which took place in the Senate Chamber at Stormont.

Roy Beggs MLA said “It was an honour to lead the service alongside Deputy Speaker Dallat MLA and Dr Malcolm McKibbin, the Head of the Civil Service. It is important that we remember the fact that so many of our forefathers sacrificed their tomorrow for our today.  We will be forever in their debt and the living owe it to those who can no longer speak, to tell their story for them.”

“The Senate Chamber was used as part of the war effort during WW2, as a RAF operational HQ. Indeed, the first sighting of the Bismarck was reported to the Senate Chamber so it was very fitting that the service of remembrance was in this location.  I also had great honour in laying a wreath during the service on this, the centenary of the start of the First World War (1914-1918), which saw many men from Ulster perform outstanding acts of heroism, especially at the Somme in 1916.”

This entry was posted in Articles, Assembly, Deputy Speaker, In The News, Press Releases, This Week at Stormont. Bookmark the permalink.