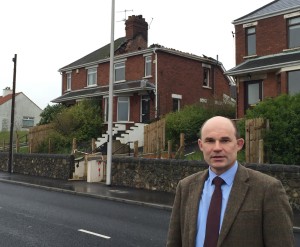 Mr Beggs at the site of the recent arson

East Antrim Ulster Unionist Party MLA, Roy Beggs, has contacted the Regional Development Minister, Michelle McIlveen, MLA to urge her Department to release land and 17 houses on the A2 Shore Road, Greenisland, for sale.  Such a move could minimise the potential for anti-social behaviour or arson in the area.

Roy Beggs MLA, on the 21st December 2015, wrote to the Minister, stating “You will be aware from news reports that a suspected arson attack last weekend resulted in closure of the A2 carriageway owing to levels of smoke.  The property has been described as one of the ‘abandoned’ properties beside the A2.  Can you please confirm if this property was one of the properties vested as part of the A2 road widening scheme and whether or not it remained in public ownership?  Can you please also confirm whether or not all the vested properties have, as of yet, been sold back into the private sector?  If not, how many remain in public ownership?  If the process of selling these properties has not been completed, can you advise what progress has been made to date and when you expect all properties to be sold?”

Responding to the East Antrim MLA, the Minister said “My Department acquired a number of properties along the route of the A2 Shore Road scheme, mainly under blight legislation.  Following completion of the scheme, 17 houses and seven sites became available for disposal and are being progressed through the government disposal process, with the aim of completing as many sales as possible by the end of this financial year.  The sale of these properties will make a significant contribution towards my Departments £3.25 million 2015/16 Capital Receipts Income Target.”

Mr Beggs MLA concluded, adding “The sooner the houses and sites are once more occupied, the sooner that a normal community can be re-established in the area.  It is my firm belief that if these properties were occupied again, then the associated risk of anti-social behaviour and arson attacks would be minimised.  In addition, given the financial climate, I believe that it would be much better if the capital involved was recouped and re-invested in other publically funded projects.”