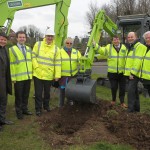 Roy Beggs MLA said “The need for the A2 widening at Greenisland has been apparent for decades. Having highlighted the issue during the Belfast Metropolitan Area Planning process, I was pleased that the bottleneck was recognised as one of the top 5 priorities within the entire greater Belfast area.

“Whilst on the DRD Committee I highlighted to other members the fact that the average speed on the A2 at peak periods, is under 10 mph and one of the most congested roads in Northern Ireland. I had also lobbied the previous Sinn Fein Minister when he mothballed the scheme and directed money elsewhere. Clearly action had to be taken, and I am pleased that having pressed the issue with UUP Minister Danny Kennedy, he juggled his budget, prioritised and has delivered on the A2 Greenisland widening scheme. This has fulfilled a 2011 election commitment that the Ulster Unionist Party made to prioritise the scheme.”

At the event, Roy Beggs MLA thanked the Road Service engineers and consultants who had progressed the scheme which has finally resulted with work commencing on the ground.

“The official sod cutting event that I attended on Thursday will mark the beginning of 2 years of works that will result in the completion of the widening scheme to provide two lanes of traffic to and from Carrickfergus. This is an issue that I have lobbied for extensively during my time as an MLA and also while I was a Councillor. I was proud to have received a personal vote of thanks from the Minister in his speech at the sod cutting event.”

“The improved road infrastructure will provide a welcome boost to local business in Carrickfergus, Larne and Newtownabbey with better road links to local centres of population. Whilst traffic lanes are to remain open during the work, there may be some additional congestion. I would ask that road users should have an understanding of the situation, and those that can, should consider alternatives such as using the increased number of trains travelling between Whitehead and Belfast.