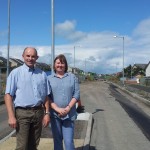 Ulster Unionist Party MLA for East Antrim Roy Beggs Jnr has welcomed completion of the third stage of the roads infrastructure linking Lindara and Walnut Hollow in Larne West, and has said he looks forward to the early introduction of public transport into the area.

“It has been a source of massive frustration for residents living in these private developments in Larne West, but finally the roads and pavements covered by the Roads Bonds for Lindara have been finished, and the surfacing of the main spine road running through Lindara connecting to Blackthorn Hollow and in turn on to Killyglen Road has been completed.

My office has been seeking resolution of this issue for a very long time, but it was the personal intervention of the DRD Minister Danny Kennedy which crucially made Roads Service act decisively to draw down the Roads Bonds and finish what was left unfinished when the developer went bust.

A new watermain was laid between the Linn Road and Walnut Hollow in the summer, and I am pleased that this work was sensibly scheduled to avoid the unnecessary digging up of a newly top coated road.   We are waiting on approval of a Vehicle Restraint System within the site and some work to the headwall of the culvert has still to be finalised. When these issues are resolved the adoption process will be complete.

The white lines were marked out at the end of last week, and I look forward to Roads Service officially adopting the road for future public maintenance, and crucially giving Translink the green light to introduce bus routes into Lindara and Walnut Hollow. I have a longstanding commitment from the Translink/Ulsterbus manager at Larne bus station- Mr Todd to put a local town service bus through this area on an hourly timetable. This will be a welcome development particularly for those pensioners keen to make more use of their senior travel passes.”