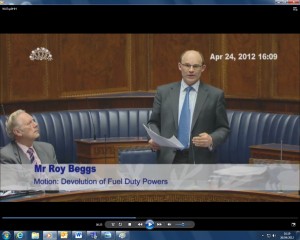 “That this Assembly condemns the forthcoming 3p rise in the cost of fuel; notes that our people pay some of the highest fuel costs in Europe; recognises the potentially significant cost to the block grant of devolving fuel duty; and calls on the Executive to lobby Her Majesty’s Government to take action to address high fuel prices in Northern Ireland.”

Mr Beggs: The main motion sought to solve the difficulty of the high cost of fuel in Northern Ireland by simply devolving the tax-raising powers on fuel duty. What was not explained, although I did attempt to draw it out, is how that gap in funding would be filled. Clearly, there are European rulings and regulations to indicate that a region, if it is to diversify from other parts of the nation, must stand on its own feet with regard to that form of taxation. If, for instance, we were to reduce the tax on fuel by 5p as has been indicated, it would cost £100 million. Are we going to cut support to the health service or the education service by £100 million? There was no explanation.

The words “rates” and “wealth tax” were mentioned.  No mention was made of what cost would be involved in administering any such systems and developing such additional taxes. It is not a well developed plan at all. There are huge dangers in what is being talked about, with no significant benefits; it is simply moving tax from one part to another, with no economic benefit clearly illustrated. Therefore, there is a problem with the main motion.

Sandra Overend proposed amendment No 2. She highlighted that one practical issue is that, effectively, we, along with other regions of the United Kingdom, including Scotland, Wales and other northern regions, would have to lobby Her Majesty’s Government to highlight the difficulties we are experiencing as a result of the high cost of fuel, particularly in rural areas, where that has a big impact. We have to thank the Assembly’s research department for its information. It shows that we have some of the highest petrol and diesel costs in the United Kingdom and that the United Kingdom costs are the second highest in Europe. We are suffering significantly due to our rurality, our peripheral position in Europe and the taxation levels that exist. People living in rural areas of Northern Ireland have to use more fuel to travel to town to shop, to work or to go to school.

My colleague Leslie Cree highlighted the issue of administrative costs. Dream up more and more ideas for devolving taxation powers, but bear in mind the taxation costs and the cost of developing very extensive computer systems to run and administer them. You do not get such things for free. He also highlighted the fact that, in those areas where there has been consensus to devolve powers here, an economic business case has been thought out: for example, air passenger duty for long-haul flights, from which an economic benefit can flow, or, indeed, the potential for revitalising our private sector economy through corporation tax. Were we to eventually get to the stage of that being formally offered, there will be a cost involved. Really, to take anything more on board at this stage could actually rule that out. We cannot overload ourselves. Let us face the fact that we will have a cost to pay to deal with that and to enable our economy to take off. Let us not bring in uncosted, unplanned and uneconomic additional ideas that have been thought up on the back of a fag packet.

In speaking to amendment No 1, Simon Hamilton indicated support for widening the rural fuel duty relief scheme to benefit Northern Ireland. That is another practical solution that could benefit here, and it is something that I can support. We should try for it; there is no harm in trying. He also said that reducing fuel tax in Northern Ireland by 5p would cost £100 million. He and some other Members questioned how that would be funded. We must have a plan for how we will fund it. That issue was highlighted by Trevor Lunn, DUP Members, my Ulster Unionist colleagues and Jim Allister.

Jim Allister, to use his language, spoke about the “fantasy economics” of Sinn Féin, and rightly so. Sinn Féin Members want everything devolved. If you devolve everything, nothing comes, because it is all here. You are almost advocating an independent Northern Ireland in which we would stand now, today, on our own feet and with our own taxation policy. I am sorry, but, as a result of the many years of terrorism, our economy could not do that. At some point, we hope to reach the stage of not being as dependent as we are at present on the rest of the other regions, but we cannot do that today. I ask Sinn Féin Members please to think through the implications of what they are saying. They do indeed have fantasy plans.

The SDLP amendment proposes setting up a commission. We argue that we need to try to do things now. We do not want to wait six months or a year for a commission to report. Let us act now to try to stave off some of the proposed increases already earmarked for petrol prices not only in Northern Ireland but in the rest of the United Kingdom. Let us see whether we can gain some specific benefits for this region, and make our argument. The European Commission has accepted that peripheral regions of Scotland could benefit, so why not try for this part of the United Kingdom?

In conclusion, I ask Members to support the Ulster Unionist amendment