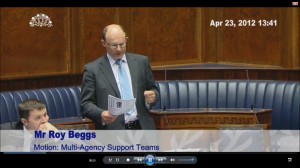 Roy Beggs MLA has voiced his support for the work of Multiagency Support teams in providing extra health and educational support to younger primary school age children. Proposing a motion in the Assembly, the UIster Unionist MLA highlighted the success of this model in detecting and addressing problems which children may experience in the early stages of their education.
In the Northern Trust area, there are currently 4 Multiagency Support Teams for Schools (MASTS) who are made up of health and education experts in the fields of speech, language, behavioural , physiotherapy and clinical psychology therapies.

Mr Beggs said:
“One of the scheme’s benefits is its multidisciplinary nature. A range of issues can be dealt with by using a child-centred approach. I will demonstrate how one issue can frequently trigger others. What if a child has a speech and language problem and arrives at primary school? They are not able to communicate well with their teacher, and they may not integrate with the rest of the classroom. They are likely to have behavioural problems that will flow from that. They might be very withdrawn or disruptive, which, ultimately, will affect other children in the classroom. So, because there is a fundamental problem, other problems can arise. The beauty of the scheme is that it can bring in the professionals required to help the child and the family to overcome the difficulties and benefit from education.”

In praising the multiagency approach, Mr Beggs noted that the intervention of Multiagency Support Teams for Schools had yet the reach the majority of schools in his constituency. Recently, Mr Beggs wrote to all primary schools in East Antrim who as of yet had not applied, urging them to seek the services of MASTS. Roy Beggs also urged the minister to ensure that funding would be available so that every school could join. When accepted on to the scheme, school Principals can make referrals for p1 to p4 pupils who have speech, language and communications needs and social, emotional or behavioural issues requiring extra support.

Feedback on the scheme from parents, teachers and children has been very positive: 78% of principals and 69% of teachers highlighted that the children benefited from the intervention of the MASTS service; 95% of parents and carers highlighted that the children benefited from the support; and 92% of the children who have been interviewed indicated that they would recommend it. The effectiveness has also been recognised by the achievement of national, regional and local awards. I am aware that the benefits that can come from the scheme can help our children to get their foot on the educational ladder.
It is vital that we bring in the scheme and allow all our children to benefit so that no one will slip through the gaps in our system.”

To access a copy of the Offical Report from the Northern Ireland Assembly during the debate on Multi-Agency Support Teams, follow the link below: