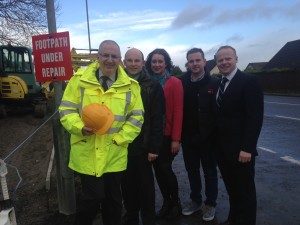 Roy Beggs MLA has welcomed news that Minister Danny Kennedy MLA has provided £200k of funding for a 2km continuous combined footway / cycleway along the North side of Prince Andrew Way, in the Borough.  The UUP MLA had previously lobbied the Department for increased cycling provision in the Borough.

The UUP MLA for East Antrim said “I previously met Transport NI officials during the summer along with my Party colleague Cllr Andrew Wilson, to discuss the potential for cycleway schemes along Prince Andrew Way and for further developments along the A2 Shore Road.  The aim of the meeting was to secure better cycling networks between our secondary schools and to better link the A2 with our town centre.  This positive announcement for Prince Andrew Way, which serves as a key spine route for access to secondary schools in the area, will facilitate a safer cycling route to school for pupils.”

Mr Beggs continued; “I have also been advised, following my site meeting with officials last year, that it is hoped that progress will be made on the A2 scheme in the vicinity of Trooperslane, in the next financial year.  I will continue to press for the final link of the cycle network to our town centre.”

Carrickfergus and Greenisland Cllr Andrew Wilson added “Increased cycling provision is an issue that I have consistently raised with Transport NI officials during their quarterly presentations to Carrickfergus Council.  I welcome this extension of the cycling infrastructure in the Borough and look forward to further investment at Trooperslane, in the future.  With new and improved cycling infrastructure, more people will hopefully be encouraged to try out cycling, which will promote and boost health and wellbeing locally.  This is to be welcomed and the Transport Minister should be congratulated on his commitment to cycling and to East Antrim.”

Cllr Lindsay Millar, Knockagh representative, added “”It is great to see this work underway and I look forward to its completion, hopefully a large number of Carrickfergus residents will make good use of this new combined footway and cycleway.”

Cllr John Stewart, for the Kilroot DEA, concluded by stating that he was ” Very pleased to see the cycle lane on Prince Andrew Way and look forward to see work starting on similar schemes across Carrickfergus”.