Ulster Unionist MLA Roy Beggs has expressed his frustration at the length of time it is taking to demolish the empty and heavily vandalised flats around the green at Craigyhill, Larne.

In a statement the East Antrim MLA said:

“It is deeply frustrating for residents who live near the green at Craigyhill that the demolition of the flats at Dromaine Drive and Cairngorm Drive is taking so long to achieve.  Myself and local Councillor Maureen Morrow met with NI Housing Executive management a year ago, and at that point we were told that the wheels were in motion, with just legal formalities from the Board of the Housing Executive, and the approval of the Minister for Social Development required.  Subsequently in a reply to a question I placed at the Assembly, the DSD Minister confirmed that 58 flats would be demolished in total; 34 flats at Cairngorm Road, 8 flats in Linn Road and 16 flats in Shanlea Drive.  However, that was last November.  It has been said to me that the area around the empty flats- which have been subject to repeated incidents of trespass and arson- resembles Beirut in the 1980s. It is hard to argue with that damning verdict.”

“My office has again been pushing for a firm date when demolition work will commence, now that all services-gas and electricity- have been cut off.  This needs to happen as a matter of urgency, so that the blight is removed, the wider area can be regenerated, the environment improved, and anti-social behaviour curbed.” 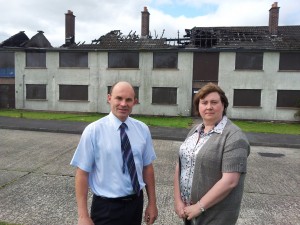